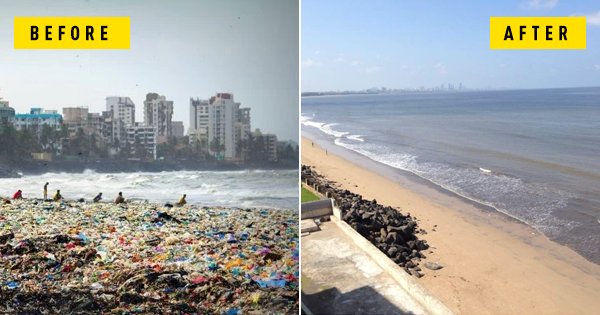 After purchasing a new, beachfront apartment in Versova (Mumbai), Afroz Shah was saddened by the amount of garbage covering the landscape. Along with his 84 year old neighbour Harbansh Mathurr, the two decided to make a change and the results have phenomenal. Over three years, Afroz Shah and a team of volunteers removed nearly 10 million kilograms of rubbish and waste from the beach. Before and after photos show the striking difference the clean up has made and for the first time in two decades, sea turtle hatchlings have returned to the beach.

Afroz’s efforts were even recognised by Prime Ministed Narend Modi,  “I congratulate Mr Afroz Shah and his movement and the way he got all the people of the area involved and created this movement that itself is an inspirational example.”

Check out more photos at SBS.