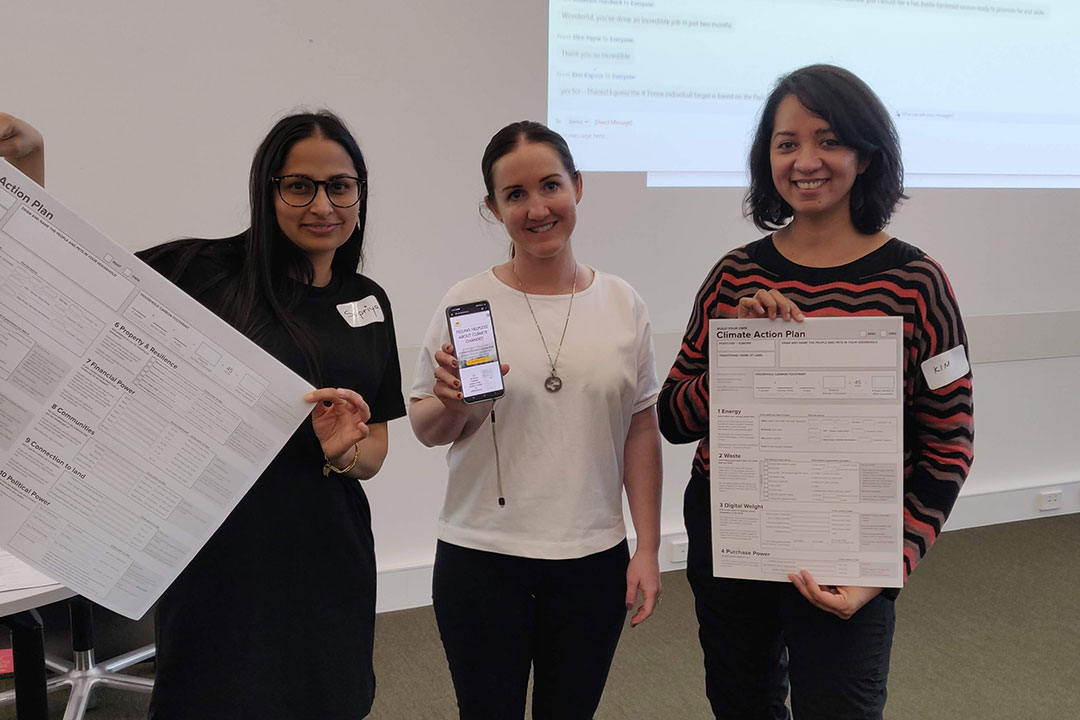 We recently caught up with Supriya, Kim and Bern from climate tech startup SevenSummers to discuss the importance of sustainability, taking climate action and what’s next for SevenSummers.

The big goal is that we as a planet need to drastically cut our carbon emissions, before we hit the threshold of 1.5 degrees Celsius.

If everyone does as much as we can to reduce CO2e emissions and takes certain actions, we at the individual and household level could help with 20% of the change we need to meet our emissions targets. So, though we know it’s not just up to us individuals, 20% is still a substantial part of what we need to do.

Australian householders feel strongly about the need to take action on climate change, but the sheer volume of messages, climate policies and technologies is overwhelming. People who are starting to care about the issue are left feeling hopeless and unsure how to help.

SevenSummers makes taking climate action easy for you: it helps you find what you can do in your own household and create your very own environmental action plan, and it’s free.

The tool pulls together all the actions that an individual and household can do, and can be personalised to fit your situation. It also integrates with local and national data sources to help you see what is relevant to your location, so you can understand your connection to what is around you.

We want to give households practical and tangible actions that can create hope through momentum, as we all race the clock against climate change. Starting in Brisbane (where the team is based), with plans for national expansion, our goal is for every household to feel empowered to take climate action today. Because globally, we may have less than seven summers left before we hit that dreaded threshold of 1.5 degrees Celsius.

SevenSummers’ core mission is to raise awareness amongst households of what they can do to take action on climate change today (starting with Brisbane).

What is the SevenSummers origin story?

It’s really a story about friends who get along and geek out, and then finding that we all care about an issue and want to do something about it! Bernadette and Supriya met while working on a large technology project for the Australian Department of Immigration, and continued their friendship during their respective stays in the USA (Bernadette in Seattle, Supriya in Chicago). Kim and Supriya, both UX designers, have remained best friends since they studied Development Communication together at the University of Philippines. In December 2019, Supriya hopped over from Chicago to spend Christmas holidays with family in Australia – and experienced the horrific impacts of bushfires and millions of animals burning to death while she (like others) couldn’t do much to help.

Three months later the global pandemic hit: Supriya and Kim reassessed their priorities and wondered if there was anything they could do to help in the climate crisis, while trying to figure out why no one else seemed to be panicking. Moving back to Australia, they read extensively, watched tons of documentaries, listened to leaders in the sustainability and conservation field and spent an entire year learning, before landing on the hypothesis that formed the basis for SevenSummers: households were motivated to change, they just didn’t know how to help.

Now housemates in Brisbane, they turned theory into action by conducting their own household audit, pulling together all the resources they could find to create habits and streamline their household and lives to be as impactful as possible, while trying to keep their own emissions low. A mega spreadsheet was formed, tested with willing experts, and soon hapless friends and family started getting subjected to their own audits as well.

Four months later Bernadette joined them for a coffee pitch, and was completely sold on the idea. In a blink of an eye, she created the online element to the tool, and the current version of SevenSummers was born!

What have been the main challenges bringing this project to life?

Our biggest challenges (after the initial launch of the tool itself) are distribution (getting the tool into as many households as possible), and accessing data to enhance the tool’s personalisation capabilities.

The first is the general hesitance some users have to actually taking action in the first place. Unfortunately, Queensland is the worst state, in one of the worst countries in the world in terms of carbon emissions, but this also means it has the greatest opportunity to make an impact. Changing hearts and minds is and will be (for a while anyway) one of our greatest challenges. The second reason is just the challenge of getting the tool in front of people, without an existing network or reach. To overcome this, we are collaborating with local giants such as Solar Schools, Zero Positive for Schools, Australian Conservation Foundation, the Queensland Conservation Council and others to tap into their audience and hopefully grow users quickly.

Data is a challenge because, unlike a lot of countries around the world, Australia has limited legislated reporting requirements for environmental data, so a lot of information is stored in local repositories (if at all). This creates an interesting challenge of hunting for data sets, and then making them usable for what we need. Where it’s been possible to find, we have engaged a data and automation guru who is connecting up data sources one by one and slowly building out the richness and personalisation of the tool. Since we have started in Queensland that has been our focus to date, but as we expand nationally, we are hoping to engage “data champions” in each state to help us connect in with state-based resources and repositories.

We have three volunteers – ourselves! We founders all have various “day jobs” to maintain, and we are always interested in skilled individuals who can help complement our team. At the moment we are especially looking for social media / marketing resources and data resources to help build out our capabilities and reach.

We are also interested in partnering with any organisations who have an existing network and might be interested in utilising the SevenSummers tool alongside their existing work. Did we mention it’s a free tool? Our team is able to run workshops with groups and teams to get them started with how to create your own customisable climate action plan.

What advice would you give teachers or students looking to make a difference?

We are all on this planet, at this time, with a chance and a duty to make an impact. It is important to see how our positive actions, no matter how small, do add up. Change can start by first figuring out where you are, and how you are connected to that area. Do you know where your food comes from? Do you know where your energy to your house comes from? Do you know what options are available to you in organising your waste or choosing how you move around? If you were to talk with your family about WHY you do certain activities, buy certain things, is it because it’s just always been done that way, or have you looked at better options? Change isn’t always easy, but in this case, it’s so worth it.

You are very much connected to a bigger picture of nature, energy sources, and systems, that your actions can affect.

We don’t have to rush off to fix problems directly related to the big things, like the Great Barrier Reef. We can start helping by “fixing our own backyard”. Just by becoming aware of the power you and your household have by taking a look inside is a powerful first step. Start in your own household and then help others in your immediate friends, families, workplaces, take that step with you. You are more powerful than you know.

Currently the commonly reported projected year of hitting 1.5 degrees is 2030, but other modelling says it could be as soon as 2027, which is much closer than we think.

We want to get our climate action plan in front of as many households as possible, currently we are working on updating the tool (stay tuned!) based on lots of user feedback and suggestions. We are also investigating the creation of a kids-focused version of the climate action plan, that could be used directly by school-aged children in the classroom who will bring the conversations back home to their households.

We have very short-term plans for national expansion (outside of Queensland), likely on a state-by-state basis as we are able to on-board more data sources. And yes, we also have longer term ambitions for further expansion that could be used internationally (our friends back in the USA are already impatiently asking for the version they can use now!).